In September of 2015, Undertale came out and swept players up in its celebration of compassion, friendship, and spaghetti-making skeletons. Eschewing violence, "The RPG game where you don't have to destroy anyone." lets players befriend killer robots, fishy knights, and warrior dogs through careful conversation in combat.

Fallen Down: Heartache & Compassion in Undertale, an unofficial look at Undertale, explores why we want to make friends with the cast of monsters that would normally get in the way of any other RPG hero. It looks at the ways the game gives monsters personalities and feelings, how it teaches the player to feel for their foes, and what that connection means should the player choose violence in their explorations of the Underground.

Featuring tens of words from developer Toby Fox, Fallen Down is a celebration of the positivity and creativity their work has created in the world, as well as a personal look into our behaviors in digital worlds and the cruelty that stems from playing in them without consequences.

"Couture's book perfectly encapsulates what makes this game so special. It's well worth a read for anyone that enjoys this indie classic." – Elizabeth Henges, RPGSite

"Fallen Down" leaves you with a lot to think about, and it's written in a direct, very affecting way – enough that it made me question my own motivations as a gamer." – Earl Green, TheLogBook.com

"I like considering this book as a love letter to this wonderful game. Each page is full of kindness and respect for this chef d'oeuvre and its creator. If you loved Undertale as much as we do: read this book. I bet it will echo to your experience too."﻿ – Esteban Grine, chroniquesvideoludiques.com

In order to download this book you must purchase it at or above the minimum price of $2.99 USD. You will get access to the following files:

I knew about Undertale for a good while, but only recently started playing it on a Linux based handheld called the RG351MP.  I happily found this book in the bundle that I purchased today and because I think I'm about halfway through the game, I only read the introduction up until page 8, because I didn't want any major spoilers.

I wanted to make that preface above, before saying that even though I'm not in a rush with Undertale and savoring the small, thought provoking details of it all; I am elated to know that however my journey will end, that I now own a continuation of dialogue and thought that will take place after I reach the end.  I am even more excited to know that Joel Couture, if the introduction is any indication, is a gifted writer and even in the introduction I was engaged and didn't want to stop reading!

Thank you Joel Couture, for taking the time to share your thoughts and ideas about this masterpiece of an RPG/Sim/Shump?  It's hard to define Undertale isn't it.  Your introduction does a great job of making players of this game reminisce the moments in this game and, this was true for me, ponder what this game is and/or means for the game designer...   Great stuff Joel and it may be a while yet before I finish my journey but as soon as I do, I want to read your work and write a proper review!  Thank you again brother!

I'm happy that someone made this book.

Undertale is my all-time favorite video game that I had the honor of playing, back at the beginning of 2020. It also helps that after playing through that masterpiece (of course, I'm talking about the pacifist route), it also introduced me to some very talented folks online who made numerous comic dubs, animations, and remixes all focused on this game.

Looks like a great read. I just finished the true pacifist and genocide route recently having never played Undertale before and I have to say Its become my favorite game in many ways. Not really an unpopular opinion but I expected to not like the game just because it was popular, but I found myself falling in love with everything. The genocide route definitely hurt to play, especially killing Papyrus.

It's a good illustration of what I don't like about irony-embracing, intellectual/pseudo-intellectual art critics who choose to believe that Undertale is a work of art to be admired from afar, but never touched by 'unworthy' hands.

These people spend so much time researching and talking... but they're not the sort of people who are truly willing to think for themselves.

At the end of the day, Undertale was a JRPG that guilt trips people for liking JRPGs.

Because Toby Fox thought it would make for a better punchline.

And while people certainly can't be forced to admit it out loud, we need more people who are willing to challenge the status quo that ironic narratives embrace.

Otherwise, things won't change for the better. Not when the entire world is full of people who joke about their problems instead of fighting them head-on.

That's what it means to fight for truth in a world full of pointless lies.

Why did you get hit with downvote hell

Because... many people in the community claim to be tolerant, reasonable, and open to new ideas and counterpoints, but their actions tell a different story.

There's a narrative that relies on the current status quo (which relies on irrelevant humor and meaningless sarcasm), and if anyone challenges it for an honest reason, no matter how valid it is...

I don't understand what you are trying to say. Can you please be more specific instead of using vague words and emojis?

Instead, you're saying the downvotes on your comment are a sign that "their actions tell a different story" than the values they claim to believe in - i.e., that it's hypocritical of them to downvote you.

It's not, though. They just don't agree with what you have to say. Their opinion about your comment is 100% as valid as your opinion about this product. If you claim that's not the case, which you did, that's hypocritical.

TL;DR: If you show up to throw shade, you're probably going to get shade thrown at you in return, and you have nothing and no one to blame but your own choice to throw shade.

Probably mainly because Undertale wasn't specifically made to make you guilt-trip about your past experiences in other RPGs, it just posed a question and explored the topic in its own world to make you think, which also ties into the game world and its thematic itself. Though I understand what they meant.

Would you say that the point of posing a question is to encourage people to come up with their own answers to that question?

well of course, that is how things work.

Then, what would you say to someone who infers that Undertale's narrative comes across as more of a lecture than a question?

Because Undertale, as a game, was centered around asking why people enjoy violent RPGs, but that narrative never left any room for people to actually answer that question in-universe.

Questions are meant to encourage ideas, interpretations and dialogue.

Undertale's narrative, on the other hand, makes an assertion delivered through the many voices of the characters, especially Flowey, the Fallen Child and Sans.

These characters love to ramble on and on about player motivations and 'perverted sentimentality,' but there's no real weight to any of it because the player never has an opportunity to question or challenge any of the characters in turn. There is no room for dialogue in-universe.

There is the choice of fighting or mercy, but those choices don't have weight because they both factor into a single, specific narrative that didn't allow anyone to actually engage with it.

Questioning the audience's love of violent entertainment without allowing anyone to question the narrative, the man who created it, or the people who keep praising it... it's questionable and dubious at best. And considering what the community did with that narrative, such as shaming and guilt-tripping Let's Players who wanted to play blind (Markiplier and Mangaminx), regardless of which choices where made (such as giving Sans a funny accent)...

"A game with one choice is no different than a game with two choices, or a game with ten thousand million choices, because these choices function as part of a larger system, and a system cannot help but make claims."

? what exactly are they doing wrong lol? defending their country from an invasion by a foreign country?

The stalest take imaginable on Undertale. Not worth reading, and definitely not worth buying.

There isn't any constructive criticism to be made. It's difficult to constructively say "have better opinions", but that is definitely the book's problem.

I will say, I kind of agree. Tho I am a bit biased bc I'm still annoyed that I thought it was a story, not a biography kinda thing on Undertale and Toby Fox

I stand with Ukraine 💙💛

yass ukrainians deserve to have peace, russia, leave them alon

i wanna buy this so bad lol

It's in the ukrainian support bundle! ;)

Reply
hanged on2 years ago(+4)

Hey there, this is cool! 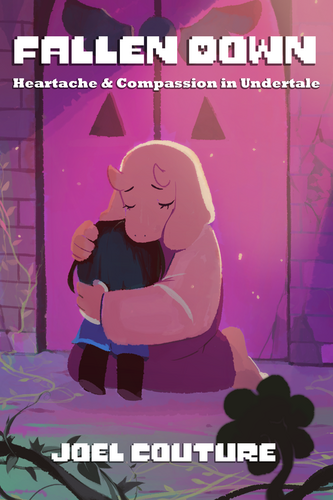